To mow, to reap and to scythe are all verbs that can be used to refer to the action of using a scythe. Although ‘to scythe’ has probably been around for hundreds of years, its modern use is particularly dominant. It makes it clear what tool is being used, as most people in modern times are not familiar with the tool, nor contemplate its use.

‘To mow’ is currently understood by the layman as meaning to use a mechanical mower. This is most likely to be powered by electricity or a petrol engine, though unpowered cylinder mowers (push-mowers) are also in use. Reference to the ‘mower’ as a person using a scythe should therefore be made with care.

When the Anglo-American scythe was a familiar implement in the countryside, the term ‘to mow’ was dominant in referring to its use in cutting grass, and ‘to reap’ when harvesting a cereal crop. Reaping was done using either a scythe or a sickle or a hook, so that the target vegetation defines the term, rather than the tool.

In Stephen Duck’s ‘The Thresher’s Labour’, written in Wiltshire around 1730, the men operating scythes are ‘mowers’ when haymaking and ‘reapers’ when harvesting wheat.

‘On Reaping with the Scythe’ is an article in the Quarterly Journal of Agriculture, 1834 (p 350) published in Washington, USA. The terms ‘reap’ and ‘reaping’ are used in association with both the ‘reaping-hook’ and the scythe as the tool used to harvest the crop.

However only a few years later, in The Farmer’s Magazine (London, 1840, p164) an article compares wheat crops ‘reaped’ with a sickle and ‘mowed’ or ‘mown’ (both terms being used) with a scythe. The article is by Joshua Rodwell, of Suffollk, England and has the title of “A Report of Practical Operations in the comparative uses of the sickle and the scythe in harvesting wheats”. So here it is the implement that defines the term rather than the target vegetation.

Etymology of mowing, reaping and scything 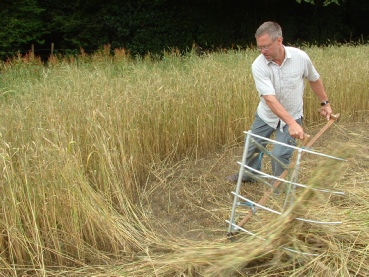 Tractor mounted and horse-drawn scissor-bar cutters tend also to be referred to as mowers when cutting grass or reapers when harvesting a cereal or other crop. The most familiar such machine is the reaper-binder.

Then there is the Grim Reaper, the harvester of souls, which sadly is what comes to most people’s minds when mention is made of the scythe.

The term ‘scythesman’ is an old one, but these days one needs to use ‘scytheswoman’ or ‘scythesperson’, and their relevant plurals, to refer to female operatives or mixed sex groups. That is another reason why the term ‘scyther’ is convenient, and currently dominant.

My pedantic interest in these terms is part of the connection with history I feel when using a scythe. I would be interested to hear of other observations of the use of mowing, reaping and scything, especially if accompanied by references to time and place.