A profile of Chris Riley

I regard the West Country as my homeland, though I was brought up in Lancashire. However I retain a passion for northern and upland environments, and wilderness walks.

After gaining some experience in forestry and farming, my career in nature conservation began at Slapton Ley in South Devon. Based at the nearby FSC Field Centre, I was manager of the National Nature Reserve. The coastal lagoon and surrounding wetland habitats is a ‘Mecca’ for birders, and Slapton Sands is a popular beach. Working in partnership with a number of organisations, I devised as well as implemented the management plan.

After fourteen years in Devon I went to work for the Wiltshire Wildlife Trust as Reserves Officer. In my care was a varied portfolio of woodland, grassland and wetland sites.  Hundreds of volunteers were engaged as well as contractors. As my eleven years with the Trust progressed I became more involved with the flagship site of Langford Lakes. In particular, a major habitat creation project involved design of a new wetland and taking the scheme through the planning process.

Working with hand tools, often with volunteers, an interest developed in continental scythes. I am now an experienced scythesman and scythe trainer, and have explored a variety of applications of scythes. This has included being a scything ‘extra’ in period films. I am committed to the promotion of the scythe as a pinnacle of low tech, low carbon alternatives, and a metaphor for sustainability. I am an active member of the Scythe Association of Britain and Ireland. 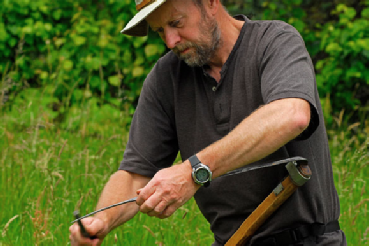 You can email Chris Riley at the email address below.

He is based in Gillingham in North Dorset, UK.

All images are by Chris Riley unless otherwise credited. If you have any problems with the site, or suggestions for links and improvements, please get in touch.